celebrate the heritage of the site

Matt Gibson Architecture + Design presents its Fitzroy Bridge House, a thoughtful renewal of a historic terraced house located in MelbourneSouth Fitzroy Heritage Precinct. The house intersects a row of four houses and is shaped by a ‘blocked history’.

The architects designed the contemporary intervention for a young family hoping to celebrate the history and legacy of the original stone building. The design process thus makes use of ‘creative adjustments’ to House‘s authenticity while enabling responsive family life, all along a challenging site.

The residential renovation by Matt Gibson Architecture + Design was largely based on South Fitzroy’s position as Melbourne’s earliest suburb. The suburban fabric of the area is characterized by Victorian-era attached houses, masonry, chimneys, cantilever details, along with a ‘high ratio of solid to empty space, distinctive rear service lanes with substantial boundary walls, and stable or loft structures’. Instead of introducing a newly added contrasting addition, architects create a series of separate ‘Mews’ or stable-like buildings, separated by courtyards.

With this strategy, the team aims to ensure that natural sunlight and ventilation reach the center of the long, narrow site. The connection between old and new has been carefully made so as not to jeopardize movement and light in these central spaces. While the project achieves this quality of openness, the light-filled spaces maintain privacy from neighbors looking down. 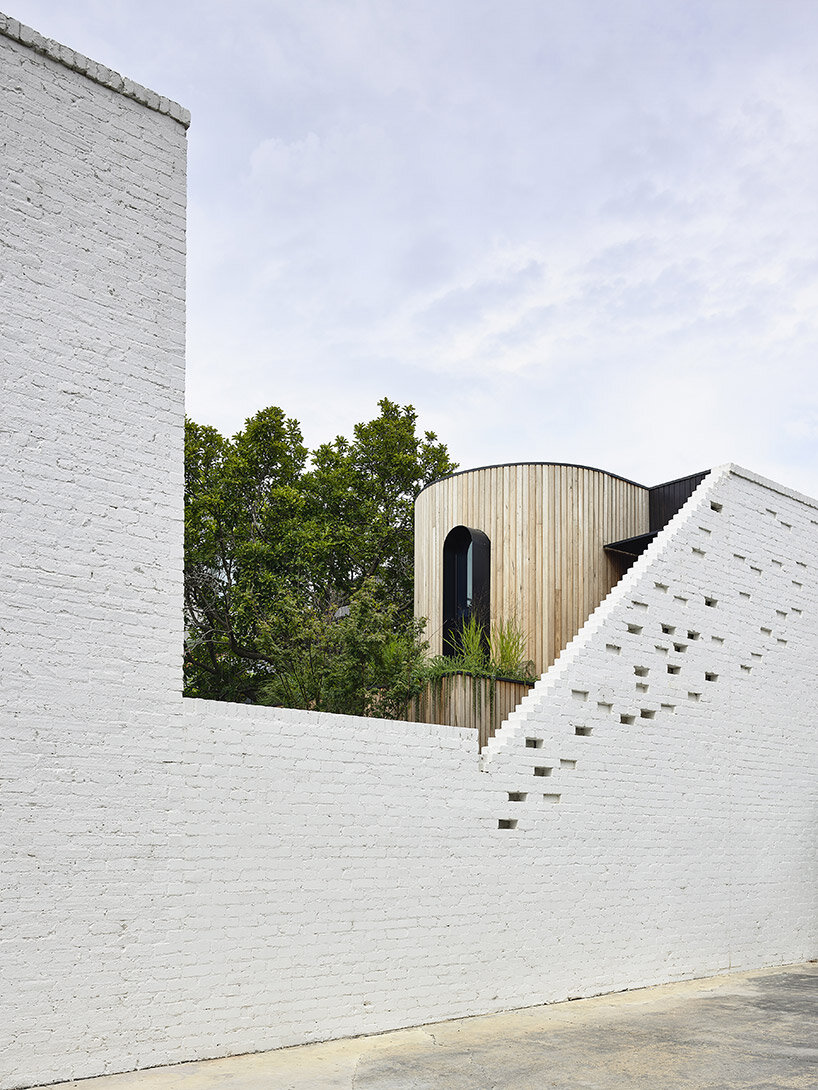 Matt Gibson Architecture and Design new mass of the Fitzroy Bridge House is new to the historic district. The team notes: “By reinterpreting this mass – character not unknown to this site in bygone times – the programmatic objectives are akin to a series of three-by-two-storey buildings with sleeping quarters above, with a linked open ‘living’ breezeway below with flexible living spaces extending out across two courtyards.’

The main courtyard is flooded with sunlight through a glass-bottomed elevated bridge and a glass-roofed walkway. The team writes: “Somewhat unconventionally, this move unlocks the courtyard and offers as many opportunities to promote privacy as access to solar energy and a borrowed utility between levels while looking down over a manicured garden below, inspired by the owner’s heritage.’ 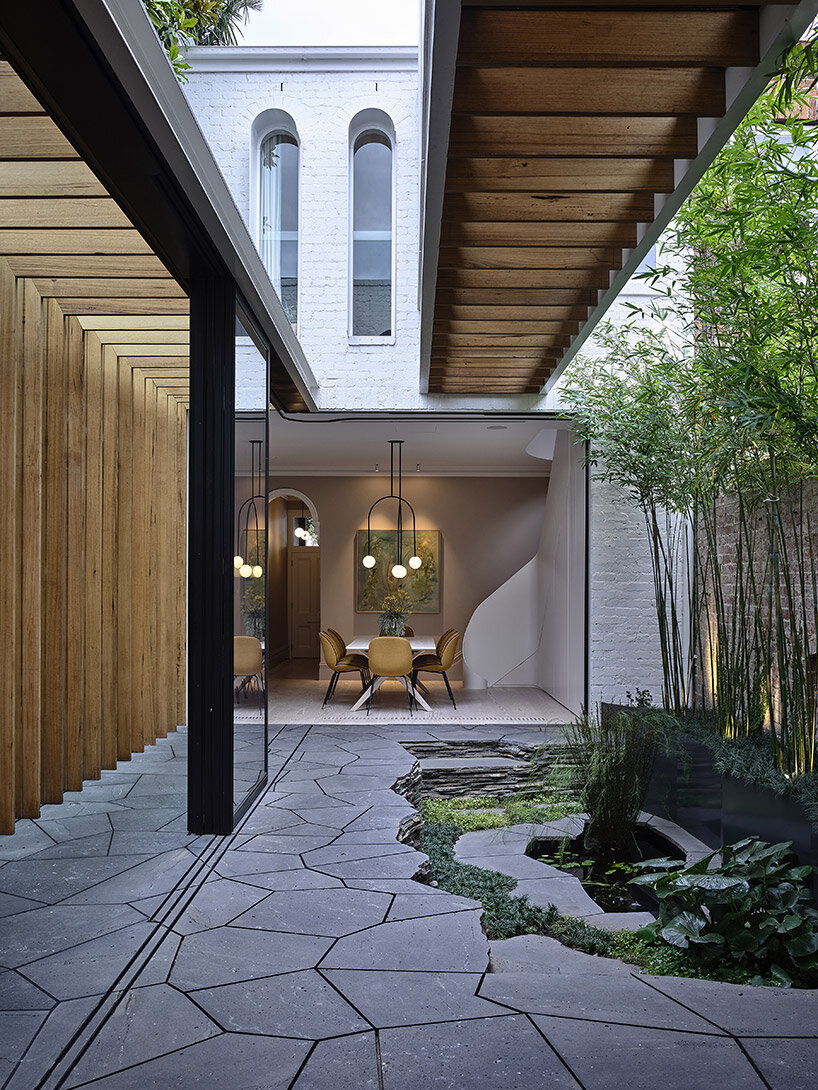 new work comes from the old

The project concerns the preservation and restoration of the original masonry facade on the street side. While the rear wing was being demolished, all the removed bricks were salvaged and reused for the construction of the rear ‘pavilions’ to ensure that ‘every new work arose intrinsically from the old’. From the perspective of the side street, the three buildings are viewed in combination, united by a wall on the ground floor, as well as by their material materiality, color and solid expression.

The group continues: ‘The gesture of repeating a series of arched windows at the ends of each building (with pronounced blinders) suggests traditional and vernacular architecture, contributing to a consistency and connection between the buildings that is in keeping with the character of the neighborhood.’ 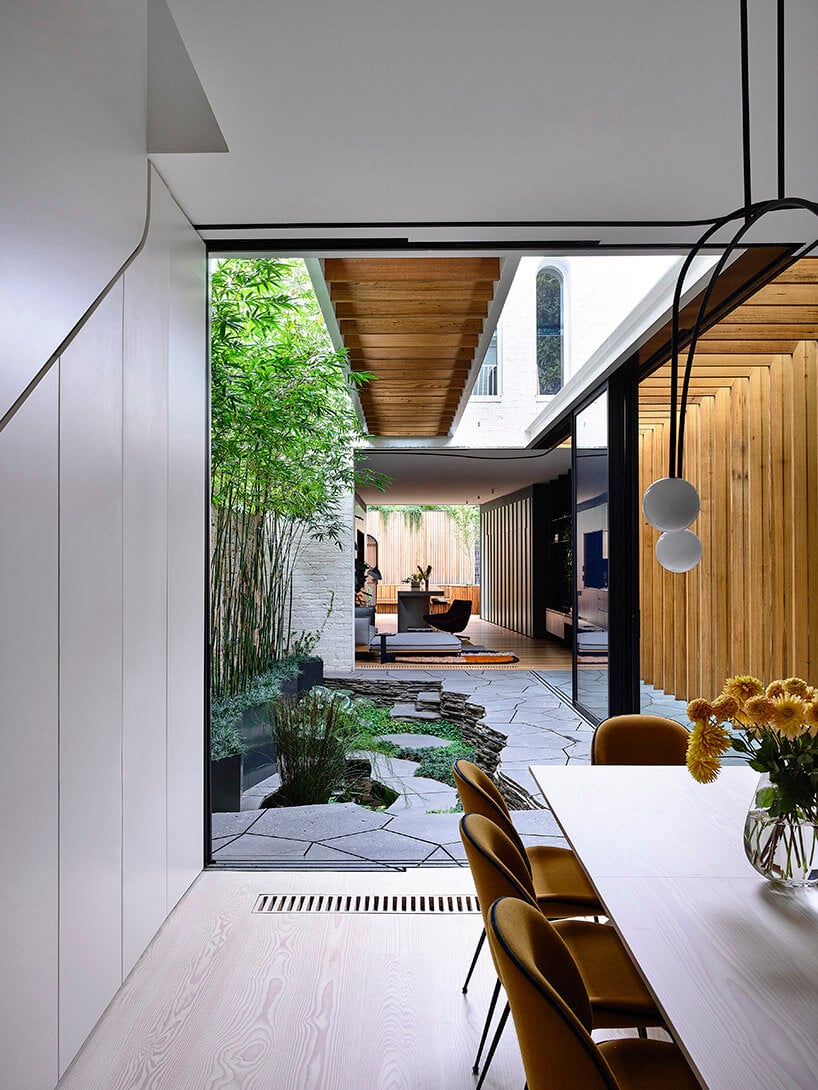 the renovation takes shape as a series of new masses 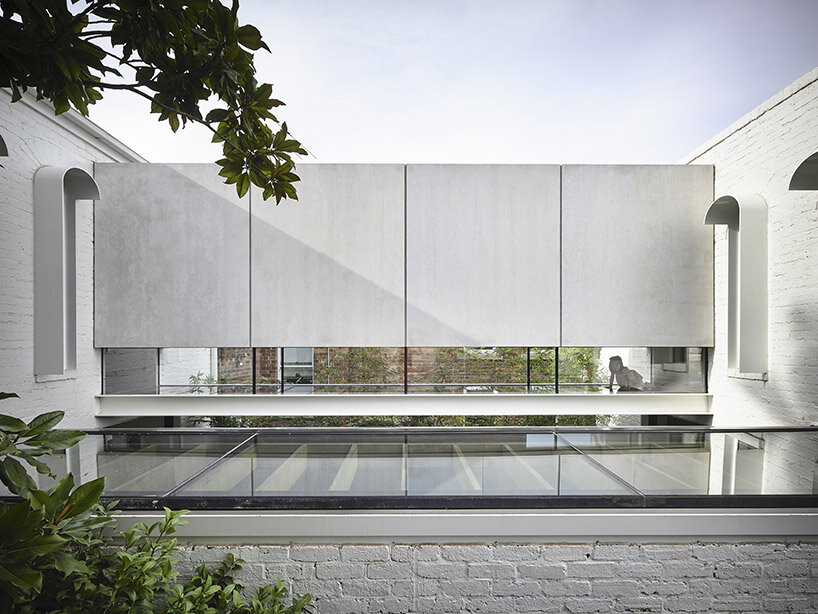 a glass-bottomed walkway allows sunlight to reach the central courtyard